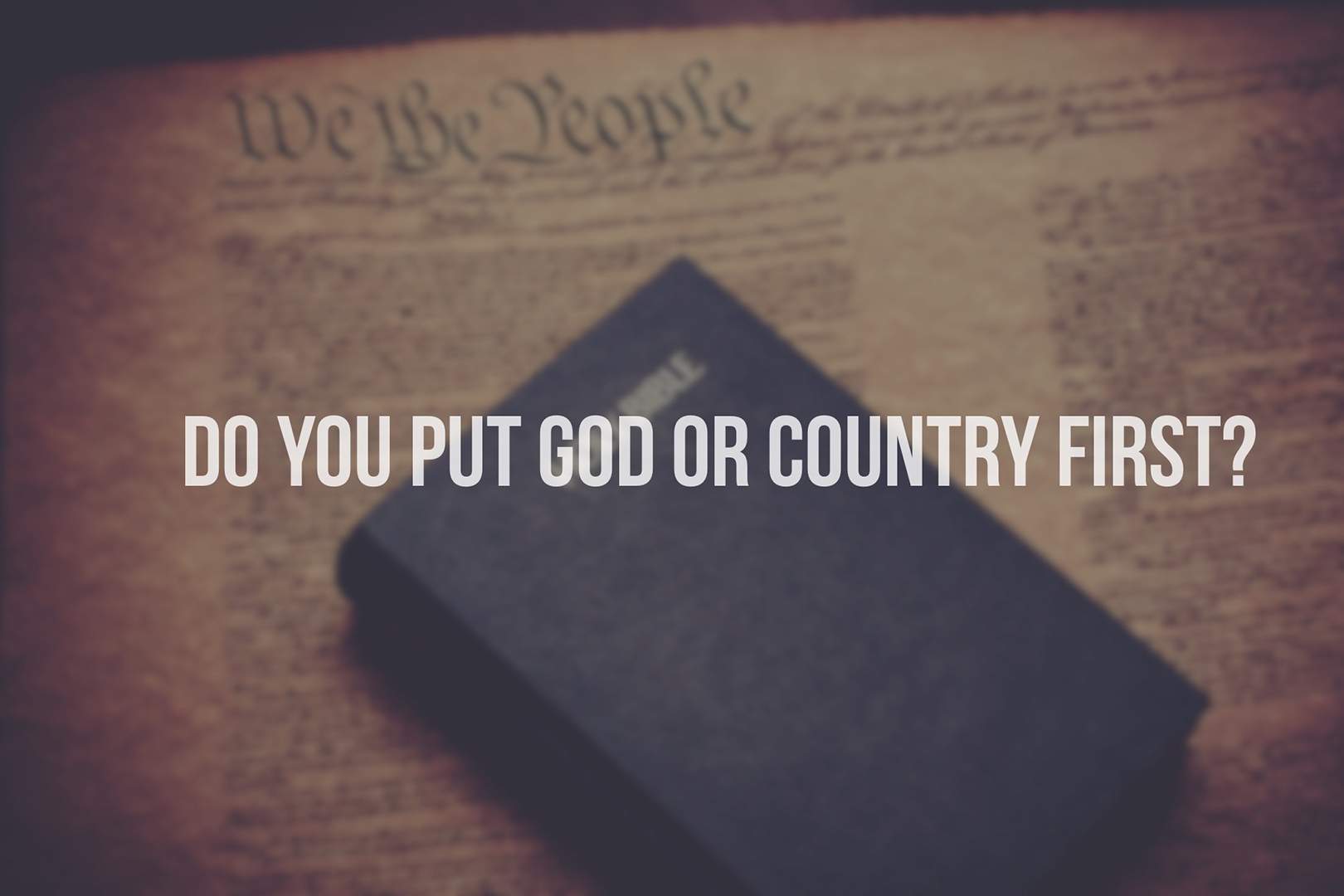 Do You Put God or Country First?

Political obsession and preoccupation is not a new thing. In Jesus’ day, there was a group of religious and political leaders called The Herodians. One day some of the Pharisees and the Herodians approached Jesus for the purpose of trapping Him in His words. The Pharisees were the most religious and the least political and the Herodians were the least religious and the most political and therefore despised each other. They did, however, have a good reason to join forces—a common interest to destroy Jesus. If there’s one thing that unites enemies, it’s a more threatening common enemy.

They asked Jesus an impossible question, “Is it lawful to pay taxes to Caesar, or not? Should we pay them, or should we not” (Mark 12:14)? The question is impossible for the same reason it’s genius on the part of the religious leaders—either way, Jesus answers the question, he will please one group and anger the other. If Jesus says, “Don’t pay taxes,” then the Roman government (with the support of the Herodians) will arrest and punish Him for starting a revolt against Caesar. If Jesus says, “Yes, pay taxes,” then the Pharisees and Jews will cry “Blasphemy!” The common belief of the Jews was that they, as God’s chosen nation, should not pay taxes for occupying the very land that God gave them. This is the definition of a lose/lose situation.

Jesus didn’t answer, “yes, pay taxes” or “no, don’t.” Instead, He said, “Bring me a denarius and let me look at it” (Mark 12:15). Jesus did this because there was a big image of Tiberius Caesar, the Caesar of the day, on the coin. On one side of the coin, it said, “Tiberius Caesar, Son of the Divine Augustus,” and on the other, “High Priest.” This coin was a proclamation that the Caesar was the Son of God and the High Priest. If that sounds familiar it’s because the Bible teaches that these are titles for Jesus alone.

After receiving a denarius, Jesus asked, “Whose likeness and inscription is this?” They answered, “Caesar’s.” Jesus responds, “Render to Caesar the things that are Caesar’s, and to God the things that are God’s” (Mark 12:17). Jesus did not say “Don’t pay taxes.” In fact, in Romans 13 Paul makes it abundantly clear that Christians are to obey the governing authorities as instituted by God Himself. Jesus also doesn’t only say, “pay taxes.” Instead, Jesus teaches these men that what they owe to the government and what we owe to God are not the same thing. If we owe the government the things that bear its image, namely, a coin, then what do we owe God? Well, what bears God’s image? We do!

“Then God said, ‘Let us make man in our image, after our likeness. And let them have dominion over the fish of the sea and over the birds of the heavens and over the livestock and over all the earth and over every creeping thing that creeps on the earth.” So God created man in his own image, in the image of God he created him; male and female he created them” (Genesis 1:26-27).

We owe God us! Our time. Our attention. Our worship. Ourselves.

We Americans are more blessed than we know. The blessings that God has poured out on the U.S. of A are too numerous to count. Specifically, for Christians, the ability to worship Jesus free from persecution or control from the government is more than enough of a reason to thank God for placing us here. A healthy view of the blessing that America is, and the opportunities it provides, is the birthplace of American patriotism. It is patriotic to love America, to enjoy watching the USA dominate the Olympics and to join the military and defend freedom. American patriotism is not antithetical to Christianity, but American nationalism is.

The mistake the Herodians made was giving to Caesar what was God’s. Namely, themselves and their worship. They were consumed with politics. The Herodians were nationalists. They worshiped at the altar of the political system. They believed, functionally at least, that God was country and country was God. Their entire lives were dedicated to using their religious standing to further their political platform. The Herodians, unfortunately, are still alive and well today. Here in America, the Herodian spirit lives on. There is no shortage of American Christians who have become Herodians without even noticing.

American Christians slip into nationalism when they begin to believe the lie that America is God’s answer to the world’s problems. America is not; Jesus is. Patriotism is loving country; nationalism is worshipping country. Patriotism is acknowledging that you were blessed to be born in America; Nationalism is deeming that you deserve it. I wonder how many Christians during this intense time in our country could say they spend as much time in Bible reading, fellowship, prayer, and serving the needs of others as they do watching, reading and debating politics.

Christians ought to think beyond policy. Since Jesus calls us to give to God what is God’s and to Caesar what is Caesar’s, then it follows that His commands supersede our political convictions. This does not mean that we ought not have political convictions and positions. After all, many so-called “political issues” are actually “theological issues.” The abortion issue is theological, not political. The marriage issue is theological, not political. Therefore, we should have convictions and we should fight for them, but the difference between the nationalist and the American Christian is whether or not the policy trumps (no pun intended) biblical commands.

I think an example is needed. If you hold a Pro-Life stance (if you’re a Christian, you most certainly should), you should fight for legislation that flows from that conviction. However, if that conviction remains solely in the political realm, you’re a nationalist. How do we know if our conviction has remained in the political realm? Do you love, help and pray for the women who have aborted their children? Do you adopt or help in supporting the adoption of the unwanted children who made it out of the womb alive? If your fight is only policy driven, if you are 0nly trying to win a political war, then you can know for sure that you are a nationalist. If you can fight for life and then love, care for and pray for, those whom you disagree with then you are truly giving to God what is God’s… yourself and your worship. We could additionally illustrate by using immigration. How we treat and care for those who are here illegally, regardless of what our political stance is on immigration reform, speaks volumes about whether we are putting God or country first.

The all-important question for Christians is this: “Are you an American who is Christian or are you a Christian that God has placed in America?” After all, heaven will not be American and English will not be the only language spoken. Praise Jesus!

After this I looked, and behold, a great multitude that no one could number, from every nation, from all tribes and peoples and languages, standing before the throne and before the Lamb, clothed in white robes, with palm branches in their hands, and crying out with a loud voice, “Salvation belongs to our God who sits on the throne, and to the Lamb!” (Revelation 7:9-10)